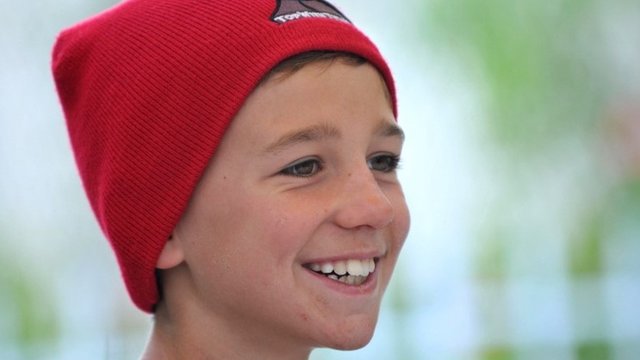 A nine-year-old boy from the United States has become the youngest person to reach the summit of Aconcagua, the highest mountain in the Americas.
"Any kid can really do this, all they have to do is try, and set their mind to the goal," he said after reaching the peak on Christmas Eve.

Check out this mobile-friendly video about the BMC Youth Climbing series event at Eica Ratho in Scotland. Ella Kirkpatrick’s story of becoming the youngest girl to climb El Cap was shown on Children's BBC in February. The BMC's Alex Messenger caught up with her to find out more.

Last October, Ella Kirkpatrick, 14, from Sheffield became the youngest girl to climb the mighty El Cap in Yosemite. Then just 13, she tackled the challenges of searing heat, lack of water, endless jumaring and her mum’s permission to join her dad, the famous climber Andy Kirkpatrick, on a big wall adventure.

From the BMC site

12-year-old Italian climbing prodigy Tito Claudio Traversa has passed away after being hospitalized from a 50-foot groundfall. Grimper.com reports that Traversa was warming up on a 6b sport climb at the popular limestone venue of Orpierre, France, during a trip with his local climbing wall team, which included 10 kids and three adults.

Apparently, the quickdraws used to equip the route were slung incorrectly, which resulted in total failure and a groundfall. Details regarding the improper usage of the quickdraws are still vague, however, a rough translation of Grimper's report notes that the slings on the draws were attached to the carabiners incorrectly.

From the UKC web site

More about the quickdraws used - A reminder to always check your gear.

This is a great video of young American climber Brooke Raboutou. Brooke is the daughter of Didier Raboutou and Robyn Erbesfield - two champion climbers from the early 1990's. It is no surprise that with a climbing pedigree like that Brooke has redpointed the difficult limestone sport route of Welcome To Tijuana (8c) in Rodellar, Spain at the tender age of 11! In this video we see Brooke in action on the rock, in the family home, and we meet her parents.

From the UKC web site

2012 seems to mark the year of the pre-teen protégé. Cameron Horst, an 11 year old climber from PA has sent (climbed) a number of 5.14a routes this year. His latest send was James Litz’s Private Halfenheimer (5.14a) at Ten Sleep in Wyoming.

A 13-year-old schoolboy has managed to climb walls using an invention he created for a class project. Hibiki Kono, along with his teacher Angus Gent, explained to Bill Turnbull and Sian Williams how it works and the inspiration behind the idea. Hibiki was inspired by the BBC's Bang Goes the Theory.
Find out more at bbc.co.uk

Ashima Shiraishi, an 11-year-old bouldering enthusiast from New York City, has been turning more than a few heads in the climbing world.

Ashima had just begun a two-week climbing expedition this spring at Hueco Tanks, a state park that is a mecca for bouldering enthusiasts, 860 acres of rock masses surrounded by endless desert and sky 30 miles northeast of El Paso.

Three days after she arrived, she stunned the bouldering world by climbing Crown of Aragorn, an exceedingly difficult route that requires climbers to contort their bodies and hang practically upside down by their fingers as they navigate a rock that juts out from the ground at a 45-degree angle.

On the scale of V0 to V16 that governs bouldering, Crown of Aragorn is a V13, a level that only a few female climbers had reached.

Find out more from the New York Times.

Dad Paul Kellagher told me about a climb he and his 10 year-old daughter Anna did this summer.
Read more here...

Wow. What an inspiration to all young climbers!

Not strictly a news story, but amazing anyway and certainly newsworthy, Jon of Cercedilla, Spain, has been climbing serious mountains since the age of 3!

Climbing offers fun, fitness and freedom for children.
Published in the Telegraph.co.uk by Clover Stroud

Jordan Romero, the 13-year-old boy looking to be the youngest Seven Summits climber, stands atop Australia/Oceania

TWO Cumbrian teenagers brought the slopes of Helvellyn to Carlisle with a 24-hour indoor climb.

Tallest climbing frame in the West Midlands is unveiled in Walsall

A 25ft tall climbing tower, believed to be the tallest in the West Midlands, has been unveiled in Walsall and has been touring the borough over the summer.

For Retailers and Climbing Walls
Kidsclimbing can get you sales and customers, but as a non-profit site, we ask that you contribute a minimum of £10 to Kidsclimbing's charity, The Children's Trust we will then add or restore a link to your products. Check out the Testimonials page to see what responses we're getting from our visitors.
In return, you'll get great exposure for your shop plus an entry in our Caring Companies list.

Find out more about donating

13 April 2015
Big thanks to Brian of the Climbing Works in Sheffield, for your generous donation to Kidsclimbing's charity the Children's Trust! Climbing Works is for those children who love to climb anything or everything, or adults looking for a new sport that is beyond the norm.
Go to the Caring Companies list

24 Oct 2014
Many thanks Stacey & Keith of Adventurous Little Legs, the specialists in outdoor clothing and gear for little adventurers, for your generous donation to Kidsclimbing's charity the Children's Trust!
Go to the Caring Companies list

03 Nov 2013
Welcome to the new fully revamped Kidsclimbing site! It should be viewable on all devices, such as desktops, tablets and phones. Please let me know if you have any problems on your device, letting me know what device and browser you're using so other users can get a better experience. Thanks!

12 Oct 2013
Many thanks to Cold Mountain Kit for contributing £10 to the Kidsclimbing Charity!

Thanks to our fantastic artist Abi for creating the cool cartoons especially for Kidsclimbing that you can see in our tablet or desktop views of this site.

Secondhand kids gear
Any parents/carers who have second hand/outgrown children's climbing shoes/walking boots please contact me and I'll post them up for sale on the noticeboard.

If you have any comments or questions about this site or you can write a review of any of the gear, please contact me.

Find out more about the Children's Trust

Why is the gecko the symbol of Kidsclimbing?